The digital currency market may be in a bear phase, and some major companies may have collapsed this year, but interest in blockchain technology is as high as ever among the world’s largest companies. A new report has revealed that the top 40 public companies have continued to back blockchain startups, injecting over $6 billion into these firms over the past year.

The report by BlockData looked at investments in blockchain firms between September 2021 and mid-June this year. However, the research firm acknowledged that it’s impossible to determine exactly how many of these companies invested as most funding rounds are opaque on individual contributions.

DCG, which owns every other company in the industry, from exchanges to wallets to infrastructure tools, raised the most money of the four. In November 2021, it raised $600 million in a credit facility at a $10 billion valuation. Fireblocks raised $550 million in January this year, while Dapper Labs, the company behind NBA Top Shot, raised $250 million last year. 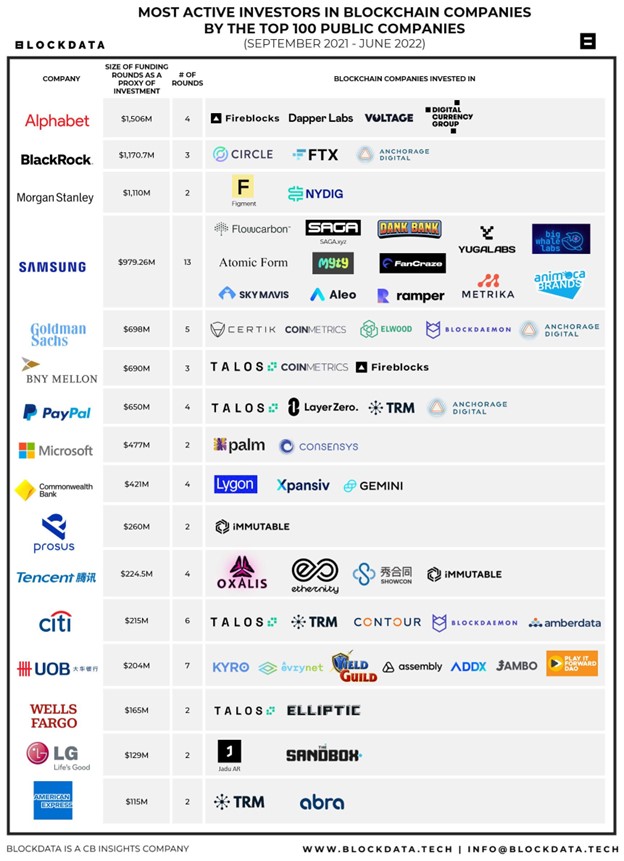 Outside the U.S., Samsung took the lead ahead of Australia’s Commonwealth Bank, which participated in funding rounds that raised $421 million. Dutch tech investor Prosus, China’s tech giant Tencent and Singaporean banking corporation UOB are the other top investors in blockchain outside the U.S.

Most global conglomerates invested in two or three startups. However, Samsung was an outlier, spreading its funding across 13 firms which collectively raised $979 million. They included Yuga Labs, the company behind the Bored Ape Yacht Club NFT collection; Sky Mavis, the maker of Axie Infinity; and Animoca Brands, the parent company of The Sandbox, a metaverse-focused blockchain project.