As the Bitcoin blockchain was designed to be immutable, saving information for the world to forever look back upon, using it to archive important data is a natural use case. While naturally that works for digital money, as Bitcoin SV (BSV) has scaled massively and also become the data carrier of the world, it also works great for things like websites, best evidenced by ImmortalSV.com.

Much like how archive.org and it’s WayBackMachine helps archive the internet, ImmortalSV offers the same service to anyone looking to do the same on the blockchain. The service is pretty simple to use: simply enter a website address, and the site will take a screenshot for you to archive. Using a Money Button wallet, just pay for your screenshot to be recorded on the blockchain, and the site provides a bico.media address for you to see that it worked.

We tested the site and found it worked flawlessly for what it’s intended to do. Using the website for the top movie in the world at the time, Joker, we paid $0.08 in BSV, and an image of the site was quickly written to a transaction and saved on the blockchain. 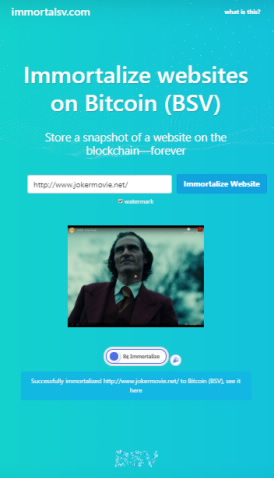 There are some important differences from how archive.org’s service that have to be taken into account. The site doesn’t proactively seek out websites to record to the blockchain; it only saves those that users wish to save. That could be both a pro and a con, in that it may miss out on quality content that should be saved to the blockchain, but it’s also more efficient, in that it won’t save a bunch of junk there either. It also doesn’t save the code of a website like archive.org does, only taking a screenshot instead.

But the business model is very different from archive.org as well. ImmortalSV requires users to pay their own way to make the service work, while archive.org requires donations from the public to provide an ad free service.

We reached out to the site’s creator, Twitter user @Synfonaut, to ask him more about the site and what his motivation in creating it was. “The inspiration behind ImmortalSV was to build something quickly so that I could learn BSV development,” he replied. “I wanted to build a useful tool, and the ability to store snapshots of websites on the blockchain seemed like a good fit.”

If you’re hoping for ImmortalSV to become a more feature filled site, Synfonaut cautioned that he thinks you should look to another service. “There aren’t any more major plans for ImmortalSV,” he noted. “I had some future ideas for more archiving, but etched has done a fantastic job providing this.”

But if you’re impressed with Synfonaut’s ingenuity and first attempt at a Bitcoin app, he’s got more coming. “Shortly after ImmortalSV, I launched Open Directory and since then have been working on a major update that helps content creators monetize their work—I should have a big announcement soon!”