Home » Toward a new and better World Wide Web?

It was a fitting profile for the World Wide Web’s proclaimed father. A Vanity Fair feature, of all places, taken up by Katrina Booker, photographed by Olaf Blecker. Tim Berners-Lee (TBL), 63, Sir Tim Berners-Lee as he’s often introduced, is the well-regarded genius who many feel gave birth to the modern convenience of the internet, the stringing together of content and, later, our very lives. These days, he’s out to mend what he considers his rather broken creation. 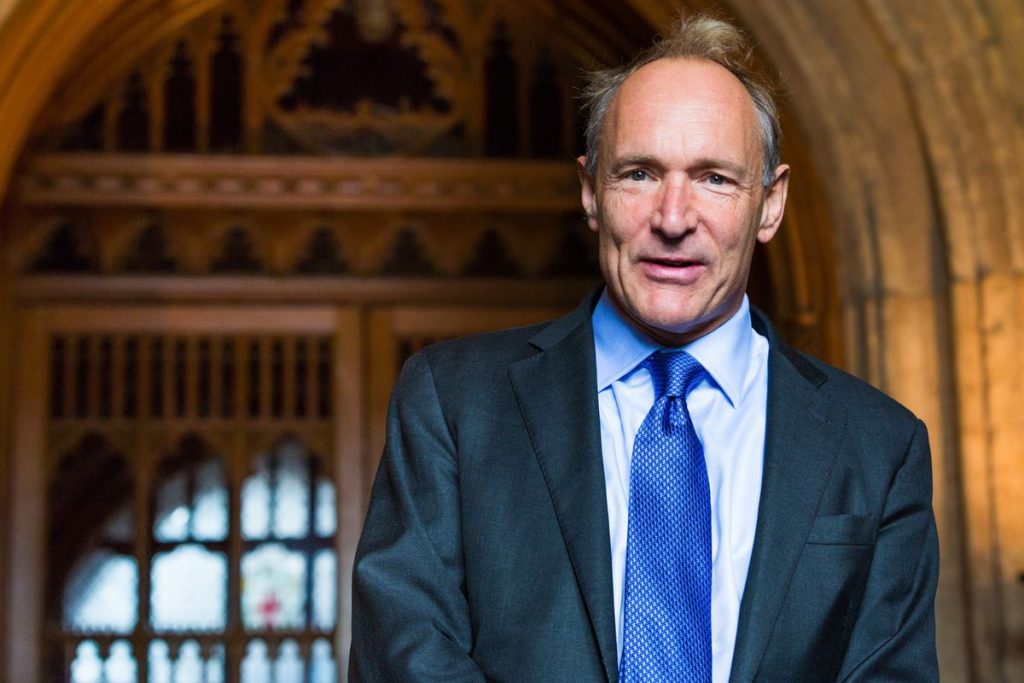 Berners-Lee comes across as the absent minded professor, sentences not quite finishing as he moves frantically to another, seemingly related, topic and tech-filled abbreviation. In 1989, “Berners-Lee’s innovation was intended to help scientists share data across a then obscure platform called the Internet, a version of which the U.S. government had been using since the 1960s. But owing to his decision to release the source code for free—to make the Web an open and democratic platform for all—his brainchild quickly took on a life of its own,” Vanity Fair proposes, eerily describing another epoch-changing event given away by Satoshi Nakamoto.

Unlike Satoshi, Berners-Lee has been lauded ever since. Turing Award. Knighted. He, from the beginning “understood how the epic power of the Web would radically transform governments, businesses, societies. He also envisioned that his invention could, in the wrong hands, become a destroyer of worlds, as Robert Oppenheimer once infamously observed of his own creation.” For TBL, a final revelation in this regard happened with the 2016 American presidential election and things Russian, and after investigations of Facebook and its data breach via Cambridge Analytica.

“For people who want to make sure the Web serves humanity, we have to concern ourselves with what people are building on top of it,” TBL warns during the interview. Of the realization concerning what his invention wrought, he verbally clutches at pearls, couch fainting, “I was devastated. Actually, physically—my mind and body were in a different state.” Centralization of the web, he explained, “ended up producing—with no deliberate action of the people who designed the platform—a large-scale emergent phenomenon which is anti-human. We demonstrated that the Web had failed instead of served humanity, as it was supposed to have done, and failed in many places.”

The article continues to offer TBL dark night of the soul quotes, such as how he “demonstrated that the Web had failed instead of served humanity, as it was supposed to have done, and failed in many places,” and “ended up producing—with no deliberate action of the people who designed the platform—a large-scale emergent phenomenon which is anti-human.” 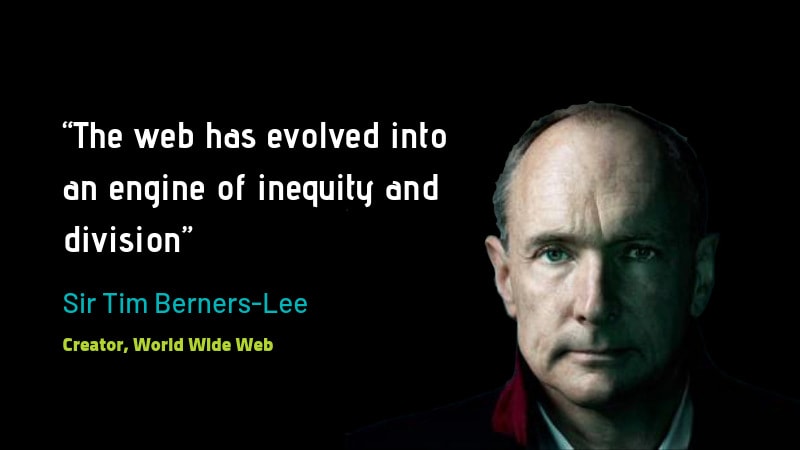 His pain has given way to a combative project, Solid. It’s an effort to reimagine the web, mitigating what he feels is pernicious corporate influence. He’s fond of repeating a statistical chestnut to buttress urgency: before the current year’s end, more than 3 billion people, something like half of humanity, will be online. The cascade impact of that many people seemingly integrating their lives into 1s and 0s makes the internet arguably the most important conversation anyone could have right now.

Vanity Fair interesting describes Berners-Lee as “methodically attempting to hack his creation.”  TBL examined in particular Facebook, “Looking at the ways algorithms are feeding people news and looking at accountability for the algorithms—all of that is really important for the open Web,” he said. The chestnut above returns, “Crossing 50 percent is going to be a moment to pause and think,” a point of contention he believes won’t empower the newly onboarded but will, instead, push them further behind. Indeed, it is a stark, Grand Canyon gap between Elon Musk’s web usage and relative freedom versus that of, say, “people in Ethiopia who have reasonable connectivity but they are totally being spied on,” Berners-Lee scolded. “There are people working in the lab,” Berners-Lee elaborates on Solid, “trying to imagine how the Web could be different. How society on the Web could look different. What could happen if we give people privacy and we give people control of their data. We are building a whole eco-system.” Solid, then, is his attempt to once again decentralize the web, giving back to individuals what they handed over to corporations: data control. And he isn’t the only one concerned about the problem of centralization and the web. Ryan X. Charles, of Yours.org and Moneybutton fame, recently gave an interview where he explained how in the future users might be paid for such access to their data. Futurist George Gilder has written an entire book about the subject, Life After Google: The Fall of Big Data and the Rise of the Blockchain Economy. TBL is clearly on to something.

It’s early days for Solid, but because TBL swings such great influence it is worth exploring if only as an intellectual exercise (in case nothing comes of it). “Solid is an exciting new project led by Prof. Tim Berners-Lee,” their website immediately announces, “inventor of the World Wide Web, taking place at MIT. The project aims to radically change the way Web applications work today, resulting in true data ownership as well as improved privacy.”

The name itself is a neologism from “social linked data,”  “is a proposed set of conventions and tools for building decentralized social applications based on Linked Data principles. Solid is modular and extensible and it relies as much as possible on existing W3C standards and protocols,” they explain. They’re poised to offer three basic promises: “True data ownership: Users should have the freedom to choose where their data resides and who is allowed to access it. By decoupling content from the application itself, users are now able to do so. Modular design: Because applications are decoupled from the data they produce, users will be able to avoid vendor lock-in, seamlessly switching between apps and personal data storage servers, without losing any data or social connections. Reusing existing data: Developers will be able to easily innovate by creating new apps or improving current apps, all while reusing existing data that was created by other apps,” Solid claims. With a goal of worldwide adoption, the project’s current status involves its startup, Inrupt, Inc. It is “building a commercial ecosystem to fuel Solid’s success and protect the integrity of the next phase of the web. Its mission is to restore rightful ownership of data back to every web user and unleash a new wave of innovation – for developers, for business, for everyone.” It’s also launching the Solid Community Site for “regular community updates, a wealth of developer resources and documentation, and general information about how Solid works.”

Reads like many initial coin offering (ICO) projects, to be honest. And, for all the talk and worry about governments and corporations, Solid has two main sponsors: CSAIL-Qatar Computing Research Institute (QCRI) research collaboration and Mastercard. Go figure.