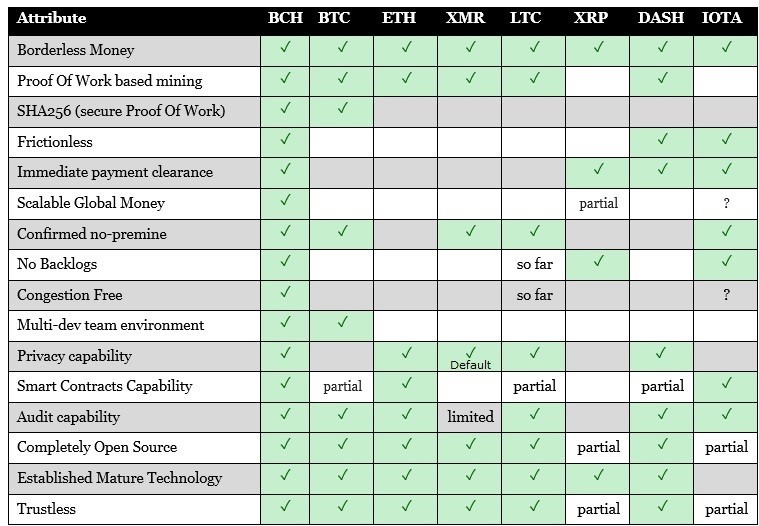 Borderless money: One of the primary key strengths of cryptocurrencies is the ability to send value across countries, anywhere in the world with relative ease. For the majority this occurs in a peer to peer manner, where the recipient is able to accept payment without the need for a middle intermediary, bank or other middle person. The vast majority of crypto-currencies, including Bitcoin Cash hold this capability. How well this is achieved varies from crypto to crypto.

Frictionless: For borderless money to truly be successful in its utility, it requires a frictionless process. This means very low fees, and now hold-points in transactions. Transactions need to happen quickly, seamlessly and without concern for volatility, capacity issues, and therefore, high variance in fees and wait times.

Proof of Work: POW mining is a proven method that protects the blockchain from tampering. It is the driving algorithm which ensures the immutability of the blockchain. Some coins usealternative consensus mechanisms which try to replicate <a href=”https://coingeek.com/proof-work-vs-proof-stake”>proof of work</a> outcomes more cheaply. However, these other methods suffer from centralization issues and reduced security of the chain.

Immediate payment validation: Every day transactions should not have to take more than a few seconds to be valid. Bitcoin Cash enables this by restoring Satoshi Nakamoto’s original 0-confirmation payment system. Many top cryptocurrencies do not actively promote or use this proven feature. BTC for example, requires at least 1 block confirmation before pay can be deemed valid. This can take anywhere from a 10 minute interval, to potentially weeks.

Scalable Global Money: Bitcoin Cash uniquely has a prime driver to become a global currency. It is also the only coin with a roadmap that not only seeks to continually increase the blocksize, but also has live projects that are actively designed to help BCH scale globally (eg Gigablock testnet & terab project).

Confirmed no-premine: Coins such as Ripple, DASH and Ethereum have question marks over the methods in which the initial coin distribution was done. On the contrary, Satoshi openly discussed the project in mailing lists before releasing it, meaning anyone could have started mining it in the beginning. Though Satoshi was the first miner, there was a complete openness in the manner in which it was done without hidden intentions or foul play. Further, it’s been almost a decade, and Satoshi has not touched any of his mined coin.

Backlogs: BTC in particular has suffered massive backlogs due to the inability to scale. Backlogs have caused multi-week waits for users and have created a usability nightmare. Congestion problems have been worst for BTC, but other popular coins like XMR and ETH have also had some issues during peak use periods.

Privacy capability: Currently BCH users can enjoy CoinJoin in order to obfuscate transactions. However, with re-enabled optcodes, other methods are now possible. XMR provides an on-by-default privacy standard, while coins like DASH provide an opt-in method. BTC and ETH are particularly lacking in this area.

Smart Contracts Capability: Now with re-enabled opcodes, smart contracts are a reality for Bitcoin Cash. Combined with low frictionless fees, not only does BCH have smart contracts, but scalable ones to boot. A variety of transaction types are now supported by the BCH blockchain.

Audit capability: Privacy is important, but so is a need to audit transactional data where necessary. For example, charity organisations can be kept honest, and governments can provide transparency. However, with inherently private blockchains like Monero, this becomes more difficult.

Completely Open Source: Unless being completely open-source, there is something to hide. Trustless nature of such projects comes from the open source code that is verifiable by the community. Projects like IOTA have still not yet revealed all the mechanics of the software.

Established Mature Technology: There is an explosion of cryptocurrencies, and many seek to do things in very interesting, novel ways. Many such projects like EOS, and IOTA, require years of maturation before the overall security and viability is established.

Trustlessness: a key tenet of cryptocurrencies. To not have to rely on middle-men, third parties, or non-verifiable code is important. The level of control a development team has over protocol, or the end user’s token should also be considered in this gauge.