“Remember, remember! The fifth of November…”

That was the old saying in commemoration of Guy Fawkes Day, in which Britons celebrate how the Gunpowder plot of 1605 to blow up the parliament was foiled. That someone would want to blow up the politicians as an act of terrorism seems like it could be a plot in present day, given the social turmoil the age of social media and fake news has wrought upon us. But back then it was the classic time-honored cause of most of mankind’s troubles, religion. The good old Catholics vs Protestants, you know, that ol’ hoot.

Thankfully, these days modern states have the wisdom to separate church and state (*heh*) as to avoid these levels of social unrest. These days, we have other more important issues to spend all our social unrest mileage points on, and anti-establishment movements have latched onto other things like the financial system, social justice, personal freedom and rights, and privacy[1]. Today, Guy Fawkes has somewhat become an icon for the anti-establishment, and moreover for Bitcoin itself, thanks to the cypherpunk movement which promoted the romantic view of Satoshi Nakamoto and the Guy Fawkes likeness as an icon for their cause. It is therefore extremely fitting, that we remember that Gunpowder plot failed horribly, and all the conspirators were subsequently hanged or killed while avoiding capture. And best of all, it all failed because of internal treachery among the conspirators themselves.

Why is this relevant now? Because, almost as a cosmic coincidence, we are about to have a potentially explosive early November event coming in Bitcoin ourselves, and it involves the oft worshipped anthropomorphized anti-hero of Bitcoin himself, Satoshi Nakamoto.

On November 1, Kleiman vs Wright, will finally go on trial in Florida. This is a case that stands to decide the fate of over US$60 billion of funds. This is going to be big, whichever way you look at it. I’m not going to go over all the details of the legal case, as others have already done a much more thorough job, (by Zeming Gao[3] here and Gavin Lucas[4] here) instead I’d like to focus on the potential explosive effects that it will have on the Bitcoin community[5]. Specifically on a particular important but perhaps missed point that Dr. Wright points out on his public slack channel… 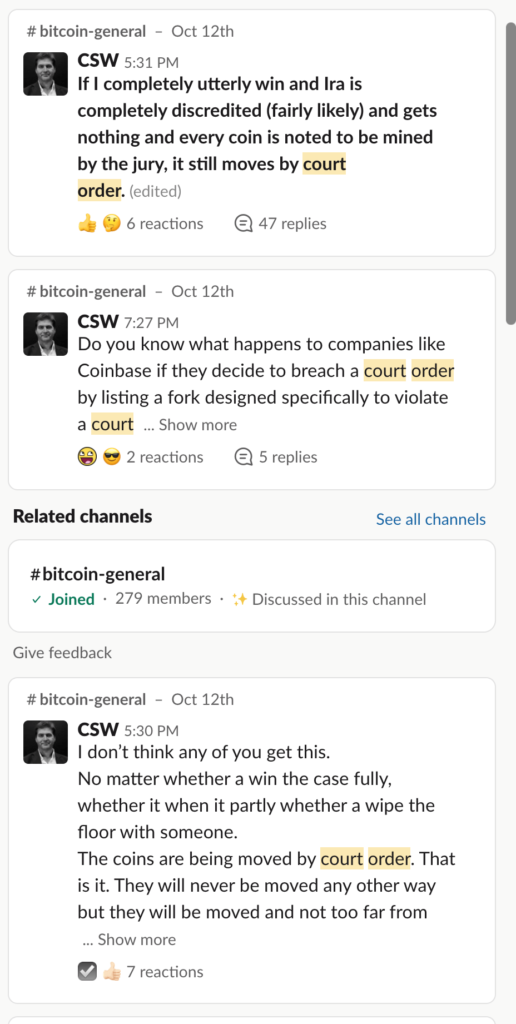 The notion is that whichever way the court decides (for the plaintiff or the defendant) the disputed coins in question will move via court order. This is profound on levels that only the BTC maximalists will understand. For they have been spending the better part of the last six years recruiting people into the Bitcoin ideology with a few cardinal beliefs mixed in with a greed incentive, largely successfully.

Principle Rules of Bitcoin: (How you get involved)

This court case stands to dispel cardinal belief #1 and #2. Which in turn, may threaten #3, which would cause the whole movement to unravel. If the worse comes to pass, there may be a spike in suicides of people who have committed themselves so far into this cult, that they cannot turn back.

The court, which has to rule whether or not the plaintiff has any rights over some 1.1 million BTC coins[7], will no doubt ascertain whether or not Craig Wright, is the rightful beneficiary of the coins (which it would seem a moot point, for why else would the plaintiff be suing), but it would be a final nail in the coffin for belief #1. As Dr. Wright has on many occasions been an outspoken advocate for proper accountability in bitcoin, and against anonymity.

However, if the coins in the settlement will be moved by court order, this completely destroys belief #2, which is the most fundamental tenet of the entire Bitcoin (BTC) ethos. If the government and authorities can order bitcoins to be moved, without a proper signature[8], then the entire security model of BTC[9] falls to ribbons. The BTC maximalists know this. They have for years. They have been preparing for this ugly inevitable eventuality since 2015 with their plans to put bitcoin ‘node[10]’ satellites into space, and trying to get as many people as possible running their own bitcoin ‘node’ in their basements. This, as many technical among us have mentioned countless times, is completely futile, as in exactly the case where an authority with a court order, new legislation, or arrest warrant is imposed upon the large, centralized mining pools and companies—they will surely capitulate; and the passive individual nodes in basements won’t be able to produce any blocks on their own, but I digress.

This is the possibility that many now must grapple with, as it will be a likely scenario, even if the enforcement of such a court order may take an unpredictable amount of time. One thing is certain, BTC folks like Blockstream had good reason to try to diminish the role of mining pools for exactly this reason. It stands to reason that any reasonable mining business will not want to defy a court order. And if some do, then a new fork in BTC would result, and new miners may seize the opportunity to jump in to claim the lost revenues left on the table from the departing miners. Greed, you see, works both ways. What’s more, imagine the precedent that would be set, if courts could order the confiscation of coins, especially in the light of the numerous exchange hacks that have lost billions of user’s funds over the decade. If they could all be recovered, then it would be a very positive turn of events, and there may be a large amount of support for this outcome (imagine all of the coins from Mt. Gox hack being recoverable, for instance). This would cause such a schism between the legal BTC and an illegal BTC fork that it would likely split the ecosystem into distinct groups, one law abiding, the other anti-law and for the first time we may be able to see clearly the proponents for their true colours. How many shout ‘sound money’ but really mean ‘tax evasion’? Or fight for the ‘freedom to be anonymous’ but really mean ‘freedom to participate in the illegal drug trade’? We may soon see. The battle that the hardcore anti-establishment BTC maximalists have been preparing for is finally coming to a head.

And just like the Gunpowder plot, it would seem that the seeds of their own demise have already been sowed into the plot[11]. The world waits. Soon the saying may be “Remember, remember! The 1st of November…”

The real Satoshi Nakamoto is coming out to kill off the guise of Guy Fawkes.

[1] Yes, I have deliberately avoided mention of the big elephants like climate change and gender equality, gender identification, and COVID vaccines etc. Namely because these movements are so toxically sensitive and charged that mere mention of them implies either support or opposition to them to some readers.

[2] Don’t ask these sorts of questions, lest you arrive at answers you don’t want to hear.

[5] I wanted to say ‘industry’ here, but let’s admit it, Bitcoin for the most part isn’t an industry, as it doesn’t PRODUCE anything economically speaking. It’s mostly just a big ponzi ring of money sloshing around chasing ROI and bigger fools.

[6] Smart readers will notice that the principle rules are a cyclic argument, and a paradox. You cannot become rich if you never sell. (Unless you have a really liberal interpretation of the word ‘rich’), and that you continually spread the word of bitcoin without an infinite number of people — but don’t worry, Bitcoin speculators are not smart readers, so this logic is fairly lost among them.

[7] Wright has gone on the record that he will be donating the funds to charity if he wins.

[8] All it would take as a small patched version of the Bitcoin software, run my the majority of miners (which have mostly all moved to US from China in the last year). Decentralization is a myth.

[9] Note: not so for BSV as its security model depends on laws being enforced.

[10] In quotes because what they call a node is not a bitcoin node as per original whitepaper which is a bitcoin mining node, one that produces blocks. In their narrative, a node simply verifies all transactions that it hears, but does not take an active role in the network in any way.

[11] For more commentary on the upcoming case and its potential repercussions, I explained this in much more detail in my podcast – The Bitcoin Capitalist