Much of the hysteria surrounding the recent court case with Dr. Wright vs Ira Kleiman has been shrouded in the controversy of the tulip trust. Up until now, I haven’t publicly stated my thoughts on much, because I haven’t had a solid opinion on much up until now. Here in this piece, I’m not going to mince words. I’m going to keep this short and succinct.

First let’s clarify some of the misconceptions. The outcome of the discovery process was an order by the judge that recommended the award to the plaintiff. This will be taken into consideration in the actual trial.

Enemies and haters of Craig Wright immediately hit social media and outlets with cries of joy as if the most wanted man in the world had just been captured. This overzealous response did not take into account that there was no judgement — but a court order.

At the heart of it all is the Tulip trust which Dr. Wright’s team argued was legitimate and held a large number of Bitcoin locked (both legally and cryptographically) until the year 2020. The judge seemed puzzled by the belief that the date on a generated PDF record of an email, should hold the identical date as the email.

The Tulip trust document can be found in an email which was sent in 2011. The discrepancy is displayed in the following two documents provided to the court. One with a 2014 date, and the other with the 2011 date. 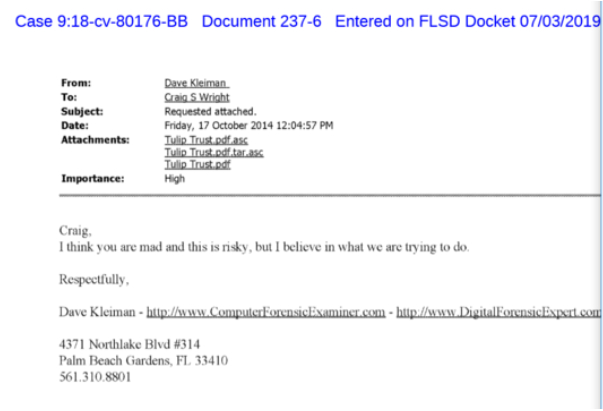 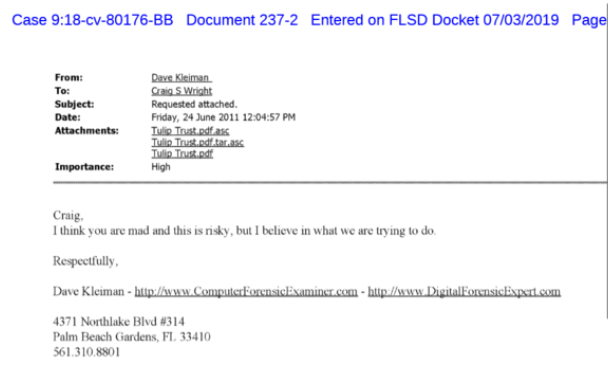 What has been ignored is the original email in question. Clearly these records stem from an email. So why wasn’t the original email interrogated at all? I don’t know the answer to that question, but it most certainly should have been exhausted option — particularly, and especially given what is at stake here. Ah well, in any case, I have my hands on the original email. The original .msg file is on my machine and we are going to investigate this. So let’s open it. A screenshot of a pdf of an email may tell you some things… But when you look at the email itself, you start to get a little more clarity. What we have here is an email sent on the 24th of June, 2011. Attached is the Tulip Trust document which we have all come to be familiar with.

Checking the email headers, every date stamp within there also matches up when you take into account the timezone differences. 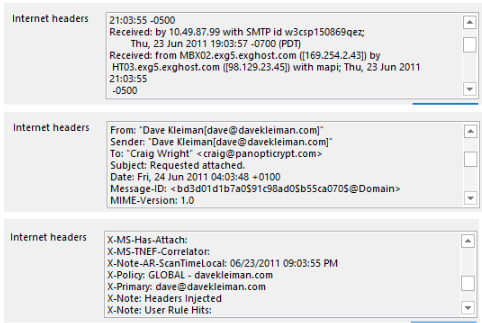 So, let’s double click the Tulip Trust attachment and have a look at the contents… That’s most definitely the Tulip Trust we are familiar with… so what about the dates associated with this file which is attached to the original email?

Okay what we have here is a very consistent date on the date that the PDF was generated. Remember once again, this is a PDF generation date, not the date the document was created… Now more interestingly also, the PDF Producer is PaperPort 12 which is a consistent version for the time period, and also, the PDF Version, falls consistently for a 2011 period.

A printout of a PDF of an email leaves a lot to be desired for. If tampering seems probable on some submission, then reverting to the source material is a no-brainer. We want to get to the truth of things after all… or do we?

Now, many people like to silence my voice because I have friendly standing with Dr. Wright. It’s true I do have a friendly standing… but if I thought he was a fraud, I can assure you this standing would be non-existent. I have never asked for, nor have I ever been paid for anything got to do with Craig. Calvin and CoinGeek don’t pay me for anything I write (they’ve tried to compensate for my efforts and I’m not interested). CoinGeek even published one piece where I was critical of both CoinGeek and Craig at one point — do you really think a paid employee would do that? Kudos to them for publishing, because they know that ultimately I want what is best for Bitcoin. You may not believe that some people actively like to push for a truth without any financial incentive, but some people actually do. And the truth is, that this central piece of evidence was disregarded in the discovery process.

Others have already tried to smear my name and have attempted to attack what they call “journalistic integrity.” And here’s a truth, if I was a journalist, this would be my career, and I’d be getting paid for it. My voice would be for sale — and it’s not.