What did Satoshi Nakamoto do right and wrong?

CoinGeek’s historian Kurt Wuckert Jr. has written about the hero’s journey of Bitcoin and concluded that Bitcoin is nearing the final showdown of its own story.

What about Satoshi Nakamoto in all of this though?

If we take the premise that Dr. Craig Wright is Satoshi Nakamoto and pay attention to the three phases of him being Satoshi Nakamoto, we find another hero’s journey there—and maybe an even better understanding when we take the biblical concept of stewardship into consideration, too.

Stewardship and Bitcoin? What is this about?

In the video shown below, Joel Dalais from the Metanet ICU and myself discussed Bitcoin in the light of morals and religion together with Dr. Wright.

Stewardship is a big component of Christianity. We don’t own this world, we were given control of it. We are expected to work hard to make it better. (…) We are here to make something of what we were given.

This was not the only occasion in which Dr. Wright pointed out stewardship as a key element in his life. In a Medium post from 2019, Dr. Wright said:

We are stewards to wealth. We do not own it, it owns us, and we have to sacrifice daily to make the information flow to retain the right, not the privilege to help maintain the plumbing that is the conduit of life.

And in an article on his own website from 2020, Dr. Wright says:

I selected Gavin to manage the software distribution. His job was to steward the software, to ensure that it had no problems. It was not a role where he was designated to change the protocol. (…) Gavin wasn’t supposed to set up systems to listen to the community. He was supposed to manage a project and steward it forward. A steward is carefully selected. Gavin was not ruling Bitcoin; he was to take my idea and build upon it.

Now this is interesting.

From Dr. Wright’s perspective, Gavin Andresen was given the control of Bitcoin, “to steward it forward.” Stewardship being passed on.

What about Satoshi Nakamoto in all of this though?

Let us get back to the hero’s journey of Bitcoin as detailed by Kurt Wuckert Jr.

In that article, Wuckert shared a helpful graphic to understand the phases heroes go through in their journey: 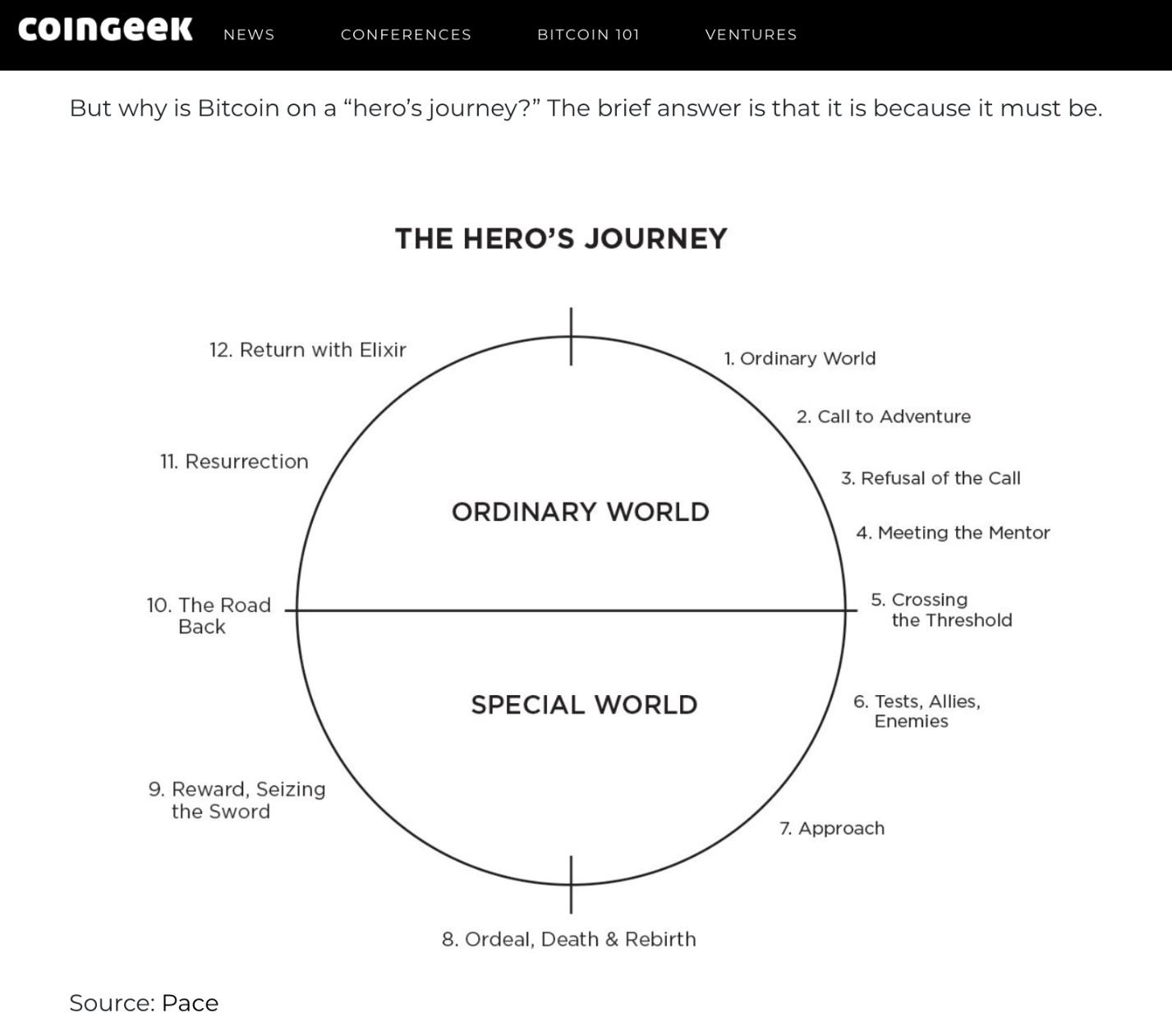 Pay attention to the points 3 to 6 on the right of the image above.

But what happened then? What did Dr. Wright do?

Calvin Ayre is my friend.

It becomes very hard to have friends when you have money. I have a few, and I would include Shadders and Jimmy in the list.

Calvin is in part my friend as he is also my mentor. There are not many people I can learn from that are alive and outside of books, but Calvin is one. Not academic knowledge, Calvin teaches me street smarts, he helps me with my interactions with people and, importantly, shows me how to live.

This was a turning point for Dr. Wright and is homogenic with the hero’s journey.

Connect the dots—3 phases and the hero’s journey!

Keep in mind the three phases of Dr. Wright being Satoshi Nakamoto as shown by Kevin Healy and let us translate these into the hero’s journey.

The hero’s journey concept and Kevin Healy’s detected 3 phases overlap. What about stewardship though?

How I understand all of this

The “call of adventure” and “refusal of the call” misses one key player: who did make the call in the first place?

It is not the hero who calls himself. So who does?

Taking the biblical concept of stewardship into consideration, it becomes clear: God does.

Satoshi Nakamoto was called to invent Bitcoin and called to be a steward of it. He refused the call of being a steward first. This is a key point in the hero’s journey, and a conflict with God in the biblical concept of stewardship.

However, if we take the premise that Dr. Wright is Satoshi Nakamoto, we see he is “back on track” now.

He is stewarding Bitcoin again.

So he is continuing his hero’s journey and has also evolved in his conflict with God concerning stewardship.

The Lord took the man and put him in the garden of Eden to work it and keep it.