Our current world has all the ingredients ready to go for a digital dystopia. Interestingly, the inventor of Bitcoin, Dr. Craig Wright, is lecturing philosophy and education in an online course.

In his recent lecture, Dr. Wright presented the topic “From Utopia to Dystopia, “especially discussing Orwell’s 1984 and Huxley’s Brave New World. According to Dr. Wright, Huxley’s work is 500 years in the future, while Orwell’s is a few decades in the past from where we are now.

As kind of an introduction to the participants of the class, Dr. Wright said:

“I have a different take—if you have already read my dissertation on both Huxley and Orwell—I don’t believe quite the way that people say in fear. I’ve actually got an alternative argument that there is a twisted form of love in Big Brother. It is very paternalistic. If you think about it, it is sort of the very bad relationship. It is the type of relationship where someone nags and is controlling etc. It is not perfect love, but it is a twisted love. It is that love where you want to make sure that people are better, despite themselves.”

The recent lecture on dystopias consisted of a variety of interesting subtopics, as can be seen in the table of contents:

The dystopian society painted by Orwell and Huxley

Dr. Wright introduced the participants to the findings of legal scholar Richard Posner, who has also researched Orwell and Huxley. Posner identified the economic restructuring of society as a key part of any dystopia. Furthermore, the dystopian society focuses on the suppression of free will and the rational thought of the individual.

According to Posner and Wright, controlling growth and innovation in a dystopian environment creates a stagnant equilibrium—precisely to prevent any changes to the system. In a dystopian control system, the state does not serve the people anymore but tries to make them serve the system. Wright pointed out that in both Orwell’s and Huxley’s works, the re-education of the people is a way to twist the perception of how the state and the citizens should co-exist.

Huxley describes a scenario where psychotropic drugs are used against the citizens, whereas in Orwell’s work, fear and change of language are implemented. In both novels, truth, as in true information, is becoming harder and harder to reach for the individual.

Dr. Wright quotes a part of Clement Semmler’s “Aldous Huxley Revisited,” where the author is convinced to see world leaders discovering that “infant conditioning and narcohypnosis” are a cheaper way of control than force. In the philosophy class on dystopias, one can see that Wright himself is worried about how the role of the state is problematic in our current societies:

People are the core of government. And if we don’t teach people how to understand and interact, people aren’t going to be the changing process. It isn’t going to be Bitcoin like some people think. Politics is always humans. 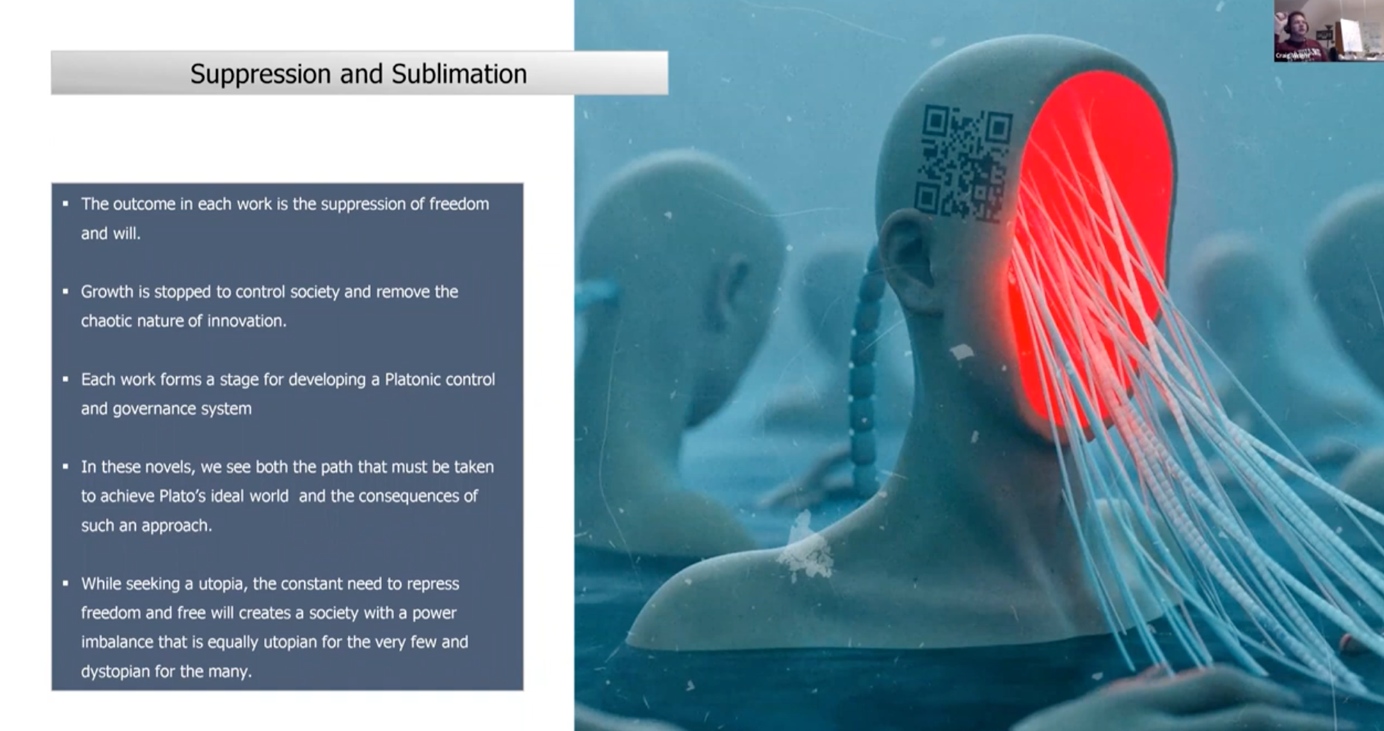 Creation of a static control world

The differences between Orwell’s and Huxley’s societies were discussed in philosophy class. Wright pointed out that the grade of maturity of the societies is dissimilar in both novels.

In Orwell’s 1984, the collective system of control has only just begun and is still experimenting with the methods to be used. The Huxley scenario in Brave New World, on the other hand, is a place where the stage of experimentation has left and has created a highly controlled static society already.

However, in both the works of Orwell and Huxley, the control system seems to focus primarily on one thing: the removal of chaos, as in lowering the potential of changes in society. Economic growth is unpredictable; therefore, the suppression of economic growth is a control tool. Dr. Wright stated that in Huxley’s novel, all economic activity becomes aligned with the new single individual—the state.

“If you can stagnate the world, we can go back to a nice feudal system, where my family can be in charge for the next 300 years. Sounds great, doesn’t it? Yay! (…) Not!” Wright said.

If we consider the creation of Bitcoin according to the white paper, Bitcoin nodes join and go as they please. There is no stagnation in that, as new players arrive and old players leave. Concerning mining, Bitcoin itself is not economically predictable and, therefore, quite a fit for a free world.

Conclusion and discussion in the philosophy class

To conclude the class, Dr. Wright pointed out that we have already left the Orwell world and are probably entering into an Huxleyian one now. In that kind of world, pleasure would be the driving force—while virtues such as duty or responsibility, as well as true love and trust, are to fade.

“The West is heading way too fast towards Brave New World,” Wright said and argued that real education is the key to avoiding such a nightmare. That is why Dr. Wright spends his time doing these philosophy classes. 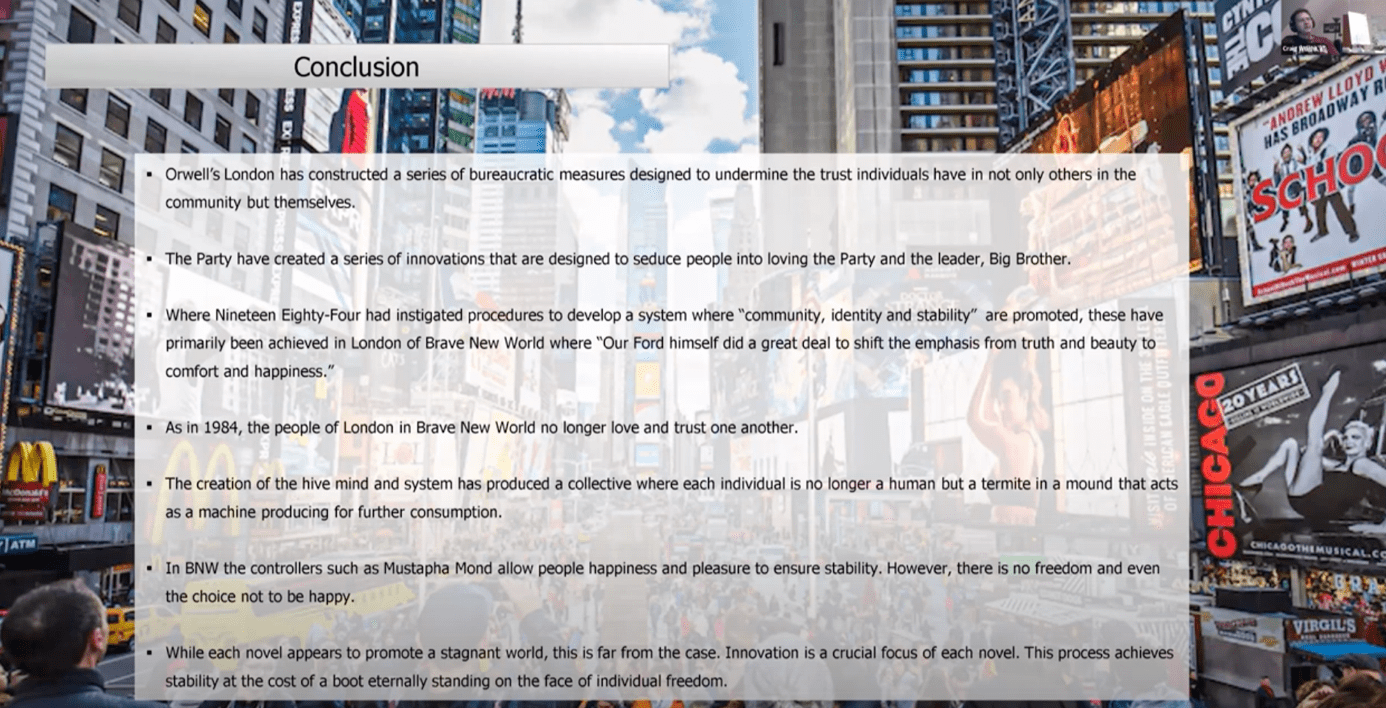 The participants of the philosophy class then had the chance to discuss the lecture content directly with Dr. Wright. Afterward, the participants held an after-class discussion, which is also publicly available.