This post originally appeared on the ZeMing M. Gao’s website, and we republished with permission from the author. Read the full piece here. 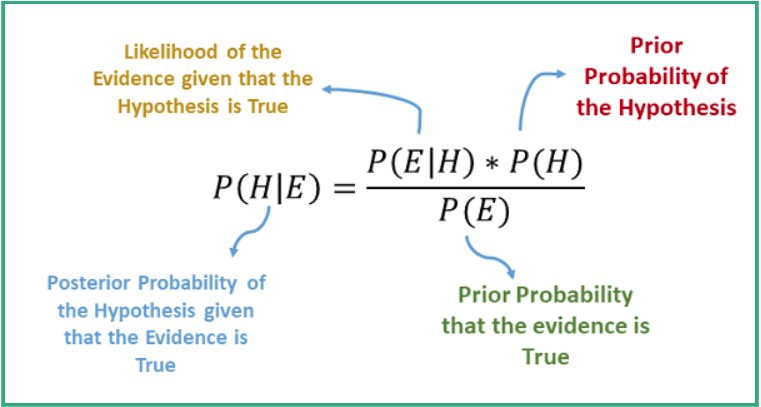 In real life, it is hard to have attestations that are truly completely (100%) independent, therefore the probability (of being false) P would be greater than the above estimate. But even if you increase the above probability by 1000 times, it is still only 10^-7, which is one in 10 million.

And remember the highest 5-Sigma standard of proving a fundamental physics discovery is 3×10^-7 (one in several million), at which level no reasonable mind could doubt.

For examples of such attestation factors, see the next section “Mounting evidence and attestations.”

Alternatively, one may use the Bayesian methodology to estimate the probability of a hypothesis being true.

Start with specifying a prior probability of being true.

(That is, one in 10 billion, a very small probability to be true. Roughly any random person living on earth has such a probability of being Satoshi without any relevant evidence attesting for the person.)

The posterior probability is continuously updated with additional independent evidence.

With the case of Craig Wright, you would soon reach near certainty of him being Satoshi Nakamoto, given the multiple pieces of evidence of high attestation values (see below).

(A graduate student could do an actual Satoshi Nakamoto Bayesian modeling for a thesis; but I already know the result.)

What does math have to do with this?

The main point of this article is not to enlist all the evidence and attestations (which are mounting high, see below) supporting Craig Wright’s Satoshi identity, but to make a mathematical argument.

A proper mathematical model is important to collectively evaluate the weight of evidence that has multiple attestation factors. It is so even if one assumes variable or partial credibility of each attestation (see below).

Fundamentally, this has to do with human psychology and how human minds work.

Human mind is usually good at measuring a single or linear factor, but becomes increasingly poor with a progression of multiple multiplications, which are typically exponential phenomena.

That’s why we must rely on math.

In the realm of investment, for example, people who trust math understand the compounding effect, while people who just trust their gut feeling tend to miss the profound compounding effect, not because they are stupid, but because our minds, or the “brain muscles”, are not made to naturally measure or cope with exponential phenomena.

Australian polymath Craig S. Wright is Satoshi Nakamoto, the inventor of Bitcoin. Despite the negative or distracting impression that most people get from the popular narrative and propaganda, the truth is gradually breaking out from a net of misinformation.

As someone who for certain reasons has always had strong aversion to personality cult, I started by accepting the then prevailing (and still prevailing) narrative that Craig Wright was a fraud, but reached an opposite conclusion after an independent study.

One has to study the entire history to draw a reasonable conclusion. This could take articles or even books to explain (and books will be written and movies will be made), but one may start with the following (and also further follow through the links provided in the references):

While doing your research, ask yourself some very hard questions:

Then, plug your answers to the above questions into the mathematical framework outlined in this article (see the first two sections), reach an objective and honest conclusion.

With regard to the above, I hear the following objection:

“I hear one million people claiming they saw Jesus, but that doesn’t mean I’ll accept that as truth with certainty.”

This objection may sound odd, but is highly representative in its underlying misunderstanding.

First, that is a different realm. Spiritual truth is established by a spiritual witness which speaks to one’s heart, not one’s mind. But with respect to Satoshi identity, we are not talking about spiritual truth here. It is mostly a material truth, which can only be based on objectivity and math.

Second, in the above objection, the premise is that the observer does not accept (rightfully or not) the objectivity of any personal testimony in the first place. The difference is in the premise, not in the math. The repeated multiplications of one million 1’s is still 1; or that of one million 0’s is still 0.

Third, and more important, in the case of proving Craig Wright is Satoshi, each individual attestation is not an expression of a personal opinion that they believe Craig Wright is Satoshi (if that were the case, even 1 million people’s opinion that he is, or he isn’t, wouldn’t really matter ultimately), but to give personal testimony of certain events or facts that the person has actually witnessed firsthand.

There is a fundamental difference between the two. When it comes to an opinion, not only could people be wrong, but are in fact often wrong, especially when people are subject to certain propaganda. When it involves a propaganda, not only could people be wrong in the first place, but also their attestation further lacks the requisite independence (required in the math model), because they are a correlated result of an orchestrated scheme.

But when it comes to a fact for each event that was witnessed (just the fact or event itself, without reaching a conclusion, which could be a person opinion), a witness has to consciously lie knowing the truth in order to give a false testimony. Of course, people do lie about facts that they have supposedly experienced firsthand, but the likelihood for that to happen is far less than people being simply wrong or misled into forming an incorrect opinion.

This is especially so when it is a trial court witness under oath. There is a good reason that all common law based legal systems have very strict evidentiary rules with regard to witnesses, differentiating a first-hand witness and hearsay or an opinion.

We like to claim with pride that we only accept “firm” evidence, by which we usually mean evidence that is not subject to any third party’s subjective human mind. But problem is that, other than the natural laws, very few important truths in this world can be established that way.

A lot of truth has to be based on personal testimonies. That’s how human society functions. One can’t blindly trust, but one can’t do without any trust either. For example, which part of the history is not relying on a personal testimony of somebody else (other than yourself)?

We are entering into a time where not only the history, but also even the contemporary happenings are becoming impossible to prove objectively, to an extent that every person will have to choose what he or she believes.

And coincidentally, that is also one of the major reasons that motivated Craig Wright to invent Bitcoin and Blockchain. His invention will be helpful if the true Bitcoin prevails. But even then, it won’t solve the problem completely.

Given the totality of the evidence, I’d say:

1) Those who haven’t examined the evidence should stop saying Craig Wright is not the inventor of Bitcoin, just so that you don’t find yourself embarrassed one day; and if you can’t say yes, just honestly say you don’t know, and are willing to learn about it.

2) Those who’ve examined the evidence but are still able to believe Craig Wright is not the inventor of Bitcoin, you’ve got an extremely hardened heart, capable of denying any truth or fact you don’t want to believe. It’s a detriment, not a blessing.

3) People who already know that Craig Wright is the inventor of Bitcoin yet for some reason have to deny it publicly, I’m sorry life has come so hard on you. Losing freedom due to earthly bribes is a sad thing.

Predatory financial and social engineers have engaged in a proxy war for the heart and soul of Bitcoin by controlling the puppet strings and cash flows behind closed doors to reward the willing and punish the loyalists in the Bitcoin Civil War.

Recently with the bear market in digital currency, overall recession in the global economy and failed, ghost businesses BSV proponents are uniquely affected as it was and continues to be treated like the red-headed stepchild of the space.

It's been confirmed that financial institutions will be allocating client money and percentages of their funds to digital assets, bringing new money into the digital asset markets.